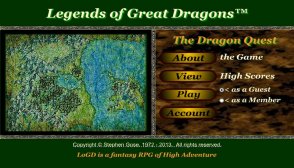 Legends of Great Dragons™ ("LoGD") is a fantasy role-playing game of exploration for Mages. It is a module of the "Adventurers of Renown" gaming series. Shops, Ruins, Forests & Shrines are among the few places to explore when not actively researching magic spells, training with dragons, or dueling other players in the "Mystic's Area". Winners of maigical combat excel in abilities & Renown; losers gain shame and injuries! This gaming system is a unique Fantasy Role-Playing game of high adventure and legendary deeds — newly updated for 2015 postal mail (PBM), eMail (PBeM) and online-game (Play By Modem) enthusiasts.

Volume I is the comprehensive rule-book for these initial three (3) adventures:

It was in those days–days that were fraught with wars and villainy–that the Revelation came to Princess Arianna and her Ladies-in-Waiting.

For three nights it appeared and vanished. Princess Arianna spoke of the terrible omen to her father, King Stefan, for the apparition frightened her.

On the fourth night, it appeared yet again as in nights past. And when it had come to its full brilliance, King Stefan hailed it and bade it reveal its purpose or be gone.

Then all those in the chamber heard the rush of wind and the roar of mighty water as if a great storm would come upon them. All trembled at the threat of destruction. Howbeit the tumult passed, and a still quiet voice was heard.

“Choose now, by trial of arms and courage, a champion who will bring forth upon this land eternal peace. A Champion of Renown and Wondrous Deeds who will be, forever after, the subject of songs, myths and legends. Find this person, and your lands shall prosper and lack for nothing–as none, hither to fore, have known.”

Thus began the quest for the Champion of Renown, herald of the ‘Age Golden’, and the Legends of Renowned Deeds.

Webmasters: Earn additional income when you register this game as an PBMCube Network Affiliate. You earn generous percentage of each paying membership and sale this game produces tagged with your affiliate number.

Purchase a license for your self-hosted Renown Game from Steve Gose Game Studios. The free "downloaded demo game" provides advertising revenues directly to our developers; but with an active License, these pre-game ads are turned off. You have two options available when licensing any Renown Game. Either license option permits:

Create Your Own Games!